Students used to pass notes behind your back. Now they’re texting and playing Clash of Clans under the desk. Instant access to information has changed the way that students learn, too. With more distractions than ever, bringing physical computing experiences into your classroom could be the key to engaging your students and bridging the real world/theoretical gap.

“Engagement” has become something of a buzzword. It’s easier said than done. But some things are more likely to engage, and some aren’t.

Even reluctant learners and other students who initially may seem less interested in STEM can have fun and learn important, fundamental skills when they’re engaged.

One approach that’s gaining traction is to engage students in physical computing experiences where they can actively learn computing concepts like coding and circuit logic by solving problems as they go.

What is Physical Computing?

Physical computing has established a presence in a small number of schools around the country. In many cases, there’s just one teacher or administrator who’s trying it, but supporters of the concept believe its role will grow. At the same time, they acknowledge that there are obstacles to implementing these types of programs, including concerns about the cost of applying it in classrooms, and the training educators need to make it happen.

Other types of hands-on, STEM-focused activities, like maker spaces, have grown more popular in K-12 districts, libraries, and other settings over the past few years, and some educators say they share many of the same goals as physical computing.

Similar to other hands-on or project-based learning programs, physical computing is meant to encourage interdisciplinary and entrepreneurial thinking and foster student creativity.

The goal is to allow students “to experience how interactivity happens,” said Rashmi Pimprikar, program director of STEAM and computer science initiatives for the Boston public schools. Students using the strategy “can solve problems, express themselves and create using technology.”

A generation or so ago, a mix of the analog and the “digital” was pretty much limited to binary “true/false” computations. Here are some examples you may have done during school:

Don’t get us wrong—those experiments are neat, and they demonstrate fundamental concepts. But compared to what students and teachers do in classrooms today, those simple experiences don’t even scratch the surface of what’s possible.

More importantly, these classic lessons aren’t sufficient to prepare students to compete in college and the high-tech job markets of the future.

The Age of Arduino 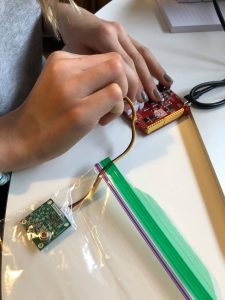 By bringing physical computing experiences into the classroom, like building and coding your own laser particle counter, students can learn essential science literacy in new, engaging ways.

And, physical computing experiences aren’t just a new way to teach old skills. Physical computing is directly relevant to the Internet of Things, augmented and virtual reality, and other up and coming technologies. Even more importantly, classes that focus on experiential physical computing teach all students fundamentals that are applicable to all of the STEM fields.

Teachers can create physical computing experiences across a broad range of skills and activities. Starting with basic circuit logic, students can build and code a circuit that acts as a dynamic braking system, build a reflex game, or even engineer an alarm.

What you might see in a room full of physical computing experiences might look a little lose or a little crazy at first: students will be out of their seats. They won’t be looking at the same things at the same time. They’ll be talking together trying to figure things out. And yes, it might get a little loud.

But the student’s phones will probably be in their pockets, and their minds will be actively engaged.

Want to check out more of our really neat projects? We’ve got more than 150 to explore. Take a look here.

This Black Friday, Save $370 When You Bring Standards-based Lessons to Your Entire Classroom

We use cookies to ensure that we give you the best experience on our website. If you continue to use this site we will assume that you are happy with it.Sounds good!Check out our privacy policy